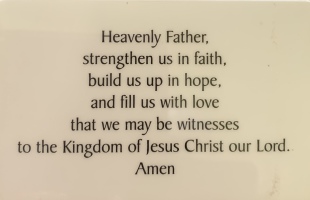 Our Father in heaven Hallowed be your name...

Give thanks for who God is and what He gives us; invite sharing of testimony to God’s faithfulness

who by the death and resurrection of your Son Jesus Christ

delivered and saved the world:

grant that by faith in him who suffered on the cross

we may triumph in the power of his victory;

through Jesus Christ your Son our Lord,

who is alive and reigns with you,

in the unity of the Holy Spirit,

one God, now and for ever.

37The hand of the Lord came upon me, and he brought me out by the spirit of the Lord and set me down in the middle of a valley; it was full of bones. 2He led me all round them; there were very many lying in the valley, and they were very dry. 3He said to me, ‘Mortal, can these bones live?’ I answered, ‘O Lord God, you know.’ 4Then he said to me, ‘Prophesy to these bones, and say to them: O dry bones, hear the word of the Lord. 5Thus says the Lord God to these bones: I will cause breath to enter you, and you shall live. 6I will lay sinews on you, and will cause flesh to come upon you, and cover you with skin, and put breath in you, and you shall live; and you shall know that I am the Lord.’

7 So I prophesied as I had been commanded; and as I prophesied, suddenly there was a noise, a rattling, and the bones came together, bone to its bone. 8I looked, and there were sinews on them, and flesh had come upon them, and skin had covered them; but there was no breath in them. 9Then he said to me, ‘Prophesy to the breath, prophesy, mortal, and say to the breath: Thus says the Lord God: Come from the four winds, O breath, and breathe upon these slain, that they may live.’ 10I prophesied as he commanded me, and the breath came into them, and they lived, and stood on their feet, a vast multitude.

This is the word of the Lord.
Thanks be to God.
Gospel Reading
Hear the Gospel of our Lord Jesus Christ according to John.
AllGlory to you, O Lord.
John 11.1-45

28 When she had said this, she went back and called her sister Mary, and told her privately, ‘The Teacher is here and is calling for you.’ 29And when she heard it, she got up quickly and went to him. 30Now Jesus had not yet come to the village, but was still at the place where Martha had met him. 31The Jews who were with her in the house, consoling her, saw Mary get up quickly and go out. They followed her because they thought that she was going to the tomb to weep there. 32When Mary came where Jesus was and saw him, she knelt at his feet and said to him, ‘Lord, if you had been here, my brother would not have died.’ 33When Jesus saw her weeping, and the Jews who came with her also weeping, he was greatly disturbed in spirit and deeply moved. 34He said, ‘Where have you laid him?’ They said to him, ‘Lord, come and see.’ 35Jesus began to weep. 36So the Jews said, ‘See how he loved him!’ 37But some of them said, ‘Could not he who opened the eyes of the blind man have kept this man from dying?’

38 Then Jesus, again greatly disturbed, came to the tomb. It was a cave, and a stone was lying against it. 39Jesus said, ‘Take away the stone.’ Martha, the sister of the dead man, said to him, ‘Lord, already there is a stench because he has been dead for four days.’ 40Jesus said to her, ‘Did I not tell you that if you believed, you would see the glory of God?’ 41So they took away the stone. And Jesus looked upwards and said, ‘Father, I thank you for having heard me. 42I knew that you always hear me, but I have said this for the sake of the crowd standing here, so that they may believe that you sent me.’ 43When he had said this, he cried with a loud voice, ‘Lazarus, come out!’ 44The dead man came out, his hands and feet bound with strips of cloth, and his face wrapped in a cloth. Jesus said to them, ‘Unbind him, and let him go.’

45 Many of the Jews therefore, who had come with Mary and had seen what Jesus did, believed in him.

This is the Gospel of the Lord.

Praise to you, O Christ.

you have taught us

we do also for you:

give us the will to be the servant of others

as you were the servant of all,

and gave up your life and died for us,

but are alive and reign, now and for ever.

Get social with us.